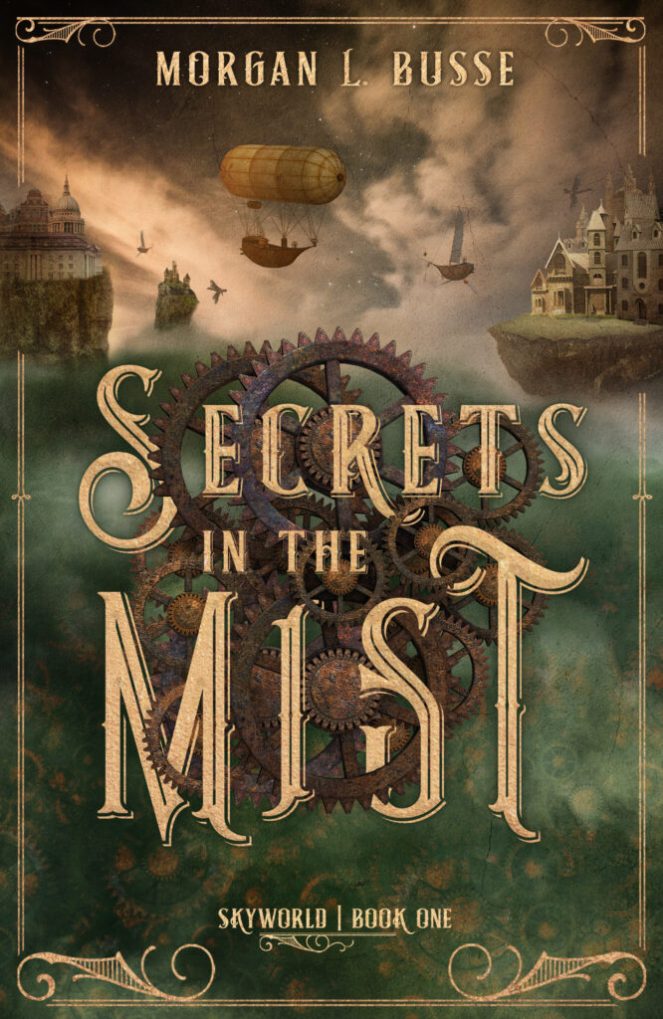 Book: Secrets in the Mist

In a world where humanity lives in the sky to escape a deadly mist below, Cass’s only goal is survival. That is, until she finds a job on the airship Daedalus as a diver. Now she explores ruined cities, looking for treasure and people’s lost heirlooms until a young man hires her to find the impossible: a way to eradicate the Mist.

Theodore Winchester is a member of one of the Five Families that rule the skies. Following in his father’s footsteps, he searches for the source of the Mist and hopes to stop the purges used to control overpopulation. But what he finds are horrifying secrets and lethal ambition. If he continues his quest, it could mean his own death.

The Mist is rising and soon the world will be enveloped in its deadly embrace, turning what’s left of humanity into the undead.

I don’t watch zombie movies or steam punk ones, I never have because it’s never been interesting to me and well I’m scared of horror movies🤭 but I had to give this one a shot since I had heard so much about this author and my! am I glad I did.
From the start of this story, I was intrigued by the utopian nature of the story. The mist that has ravaged the entire city and how they all tried to survive. I enjoyed Cass journey to survive and getting to know more about the world she lived in. The knowledge of good and evil and the questions that came with what happens when a person turns. I wasn’t disappointed and I’m definitely looking forward to the next book because I just have to know what happens next.

I received a complimentary copy of this book from the author via Celebrate Lit. All opinions expressed are solely mine.

Morgan L. Busse is a writer by day and a mother by night. She is the author of the Follower of the Word series and the award-winning steampunk series, The Soul Chronicles. Her debut novel, Daughter of Light, was a Christy and Carol Award finalist. During her spare time she enjoys playing games, taking long walks, and dreaming about her next novel.

I’m afraid to fly. At first, I tried to ignore it. Then the panic attacks came. And the one time I accidentally grabbed my neighbor’s arm during turbulence, which was really embarrassing. But it was when I was waiting for my flight at the airport and felt like I was going to burst into tears right there at the gate that I knew I needed help.

I didn’t want to stop flying. I love traveling! But the fear of plummeting to the ground scared me, so I talked to my doctor and was given medicine to help me calm down. The problem is it made me really groggy. But hey, at least I could fly again.

Then I started writing Secrets in the Mist. Half of this book is about flying and one third is hang gliding. You know, flying with just a kite on your back. To write realistically about hang gliding, I started studying the sport. I read all the articles I could find, watched a lot of YouTube videos, and in the end spent over 10 hours immersing myself in the sky.

As I first imagined, then wrote each scene in Secrets in the Mist, something started to happen. I started to lose my fear of flying. It wasn’t the first time I tried to read the science behind flight to help me lose my fear of flying, but this time, I was doing it in my head. I was feeling the air and wind, tilting my glider, catching the air drafts, and not just understanding how to fly in my mind, but also with my heart.

Not only that, by creating the exhilarating feelings my character felt when she was gliding began to seep into my psyche. I felt her joy and freedom, her lack of fear, and even more, how she felt more connected to God when it was just her, the wind, and the sky. I saw the beauty of flying through my character’s eyes.

I can fly now. Without medication. I actually enjoy the takeoffs and the feeling of the plane gliding through the air. Will I try hang gliding someday? Probably not, I still hate heights. But I never dreamed that writing about flying would help me overcome my fear of it. This is the power of imagination, and the power of story.

For Him and My Family, September 3

Where Faith and Books Meet, September 8

Because I said so — and other adventures in Parenting, September 10

Through the fire blogs, September 13

To celebrate her tour, Morgan is giving away the grand prize package of Steampunk themed basket that includes a signed book, coffee by barnies, a soy candle (so it should be safe for everyone), and a $20 B&N gift card!!

Be sure to comment on the blog stops for nine extra entries into the giveaway! Click the link below to enter.

2 thoughts on “Secrets In The Mist by Morgan L. Busse. Blog Tour Review and Giveaway”